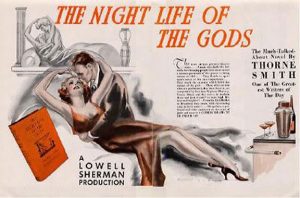 Updated: Someone representing themselves as Universal Pictures has quietly uploaded 28 feature films it released between 1929 to 1938 to a  YouTube channel called “Universal Vault.’’ The transfers vary widely in quality, but there are some real rarities — and only four of them have been released on video. Dave Kehr of the Museum of Modern Art describes them as “low-quality bootlegs.”

At least one — Lowell Sherman’s “The Night Life of the Gods’’ (1935) — has never even been shown on TV in this country. This way-out mythological fantasy derived from a novel by “Topper’’ author Thorne Smith has been tied up for decades by rights issues. Alan Mowbray stars in the effects-laden film, which has circulated in murky bootlegs that are vastly inferior to the authorized YouTube upload.

A couple of these hard-to-see films have shown at the TCM Classic Film Festival — William Wyler’s superb “A House Divided’’ (1931) starring Walter Houston and John Ford’s “Air Mail’’ (1932) with Pat O’Brien and Ralph Bellamy in a fascinating precursor to “Only Angels Have Wings’’ — are included. Two others — Murray Roth’s “Don’t Bet on Love’’ (1933) with Lew Ayres and Ginger Rogers as well as Roth’s “Chinatown Squad’’ (1935) with Lyle Talbot and Valerie Hobson — are in the series of Universal restorations currently showing at the Museum of Modern Art. Edward L. Cahn’s “Afraid to Talk’’ (1932) with Eric Linden and Sidney Fox showed at MoMA last year — but these do not appear to be transfers of the new restorations. 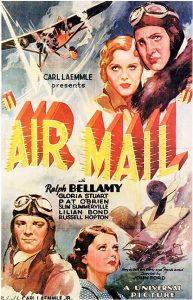 There are three James Whale films uploaded to the “Universal Vault’’ channel: “The Impatient Maiden’’ (1932) starring Lew Ayres and Mae Clarke; “One More River’’ (1934) with Diana Wynyard and Colin Clive; and “Remember Last Night?’’ (1935) with Robert Young, Constance Cummings and Edward Arnold. Mr. Arnold also has the title role in A. Edward Sutherland’s memorable “Diamond Jim’’ (1935) opposite Jean Arthur as well as in James Cruze’s “Sutter’s Gold’’ (1936) with Lee Tracy.

Other interesting-sounding films on the list include Arthur Lubin’s “I Cover the War!’’ (1937) starring John Wayne; Edwin L. Marin’s “Bombay Mail’’ (1934) with Edmund Lowe; and the Russ Columbo musical “Wake Up and Dream’’ (1934) directed by Kurt Neumann. Also: Harry Beaumont’s “The Girl on the Front Page’’ (1934) starring Gloria Stuart; and Christy Cabanne’s “Graft’’ (1931), the Regis Toomey crime drama that supposedly got Boris Karloff the job of playing Frankenstein’s monster. Plus also a trio of Buck Jones westerns from 1935 (“The Crimson Trail,’’ “Stone of Silver Creek’’ and “Border Brigands’’).

The Universal Vault channel includes four films that are available on DVD, including Frank Borage’s “Little Man, What Know?’’ (1934), released through the Universal Vault Series MOD program; and Tay Garnett’s English-language version of “S.O.S. Iceberg’’ with Rod LaRocque and Leni Riefenstahl, available via licensee Kino Lorber; as well as Pal Fejos’ musical drama “Broadway’’ (1929), which was included as an extra with The Criterion Collection’s DVD and Blu-ray releases of Fejos’ “Lonesome.’’ Perhaps the biggest surprise is a sharp-looking transfer of Chester Erskine’s independently-produced crime drama “Midnight,’’ which Universal originally distributed back in 1934. It’s circulated in terrible public domain transfers on video for decades as “Call it Murder” — the new title it acquired for a 1947 Guaranteed Pictures reissue that promoted Humphrey Bogart from eighth to top billing.

Hopefully, Universal will eventually get around to uploading some of the hundreds of pre-1950 Paramount titles it owns, many of which have been unavailable for decades in any format for decades. But in the meantime, there is a lot to savor here — from Ray Milland in H.C. Potter’s “Wings Over Honolulu” (1937) to Joseph Santley’s “Swing Sister, Swing” (1938) starring Ken Murray.