Some of director Tay Garnett’s best film take place at sea — “One Way Passage,’’ “China Seas,’’ and “Trade Winds.’’ But that didn’t prepare me for the intoxicatingly exotic strangeness of “Destination Unknown’’ (1930), which had its first showing in decades in a crisp new print derived from the original nitrate camera negative.

The extremely vividly evoked milieu is a whiskey-smuggling boat that’s been stranded somewhere in the Pacific after a ferocious storm. The crew is starting to go mad from lack of drinking water — and boy, Garnett and his cast will make you wish you brought along a battle of Poland Spring yourself. The scuzzy bootlegger (Pat O’Brien, who was a much darker and more interesting actor in his pre-Warner period) who hired the ship and his henchman (Russell Hopton) are guarding the last barrel of water with guns while taking swigs in front of the crew. 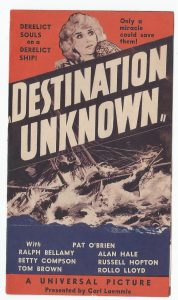 The vessel’s captain and first mate were swept overboard during the storm, so the crew is being led by a burly Swedish boatswain (Alan Hale) who discovers a cache of water in the galley. He fills empty whiskey bottles with the water and gives them to the crew — with orders to pretend they’re drinking whiskey. The crew is played by a gallery of great character actors like Willard Robertson and Charles Middleton, as well as juvenile lead Tom Brown as newcomer who’s been grievously wounded by trigger-happy Hopton.

Things quickly get seriously worse. The precious water supply is squandered, and the ship starts sinking. As everyone starts helping themselves to the cargo to drink themselves into oblivion as the end is nigh, a mysterious stowaway (Ralph Bellamy in easily the most unusual role of his half-century career) emerges from behind a cross of light — and begins to make things right. Let’s just say his closest collollary in classic Hollywood films is played by Ian Hunter in “Strange Cargo.’’

The metaphors in Tom Buckingham’s highly original screenplay aren’t always subtle, but the uniformly excellent performances make it clear that this rough collection of men are thirsting for more than water. That would include Betty Compson, a former girlfriend of O’Brien’s who apparently has been smuggled aboard by one of his confederates. But her role is so underdeveloped that it almost seems like an afterthought.

But these are very small complaint about the perfectly titled “Destination Unknown,’’ which Garnett steers to a memorable conclusion with consummate skill. Kudos to MoMA programmer Dave Kehr and his colleagues for rescuing this atmospheric treat from the sea of unseen films.

“Destination Unknown’’ was shown as part of the Museum of Modern Art’s second series of Universal Pictures rarities produced by Carl Laemmle Jr. If you’re in the New York area, I’d strongly recommend checking out MoMA’s repeat showing on Monday May 15 at 5 p.m. as this one has never been on TV, much less video.

And by all means, stick around (at 7 pm) for second program of unseen-for-decades Universal shorts picked out and introduced by Vitaphone Project founder Ron Hutchinson and featuring the likes of Robert Benchley, Ed Sullivan, Rose Marie and Henry Armetta. I haven’t seen these yet, but if they’re half as entertaining as the set shown last week you’re in for another very rare treat.