For the last couple of years, I’ve been researching the long and strange history of motion pictures on television before 1980, so I was particularly pleased to run across a piece that ran in the New York Times Magazine on December 8, 1957. This was a year after the major Hollywood studios (save Paramount) began releasing their films to television. Thomas M. Pryor, the paper’s Hollywood correspondent, asked the likes of Joan Crawford, Bette Davis, Shirley Temple, Jeanette MacDonald, Frank Sinatra, Gregory Peck and Van Heflin what it was like to see their old films on TV. I was most intrigued by the quotes from James Stewart, whose “Come Live With Me’’ with Hedy Lamarr happened to be the second film shown on WCBS’ “The Late Show’’ on Sunday December 2, 1956. Instead, he discussed a pair of independent films that hit the tube before the late 1956 deluge — one way before — which he made immediately before and after his lengthy and distinguished World War II service in the Army Air Corps.

The first is by far the more obscure. Just before his enlistment, MGM loaned their newly-minted Oscar winner (for “The Philadelphia Story”) to independent producer James Roosevelt (the president’s son) for “Pot O’Gold’’ (1941), an undistinguished musical based on bandleader Horace Heidt’s radio show, in which Stewart plays a musician named Jimmy opposite Paulette Goddard, on loan from Paramount. Released theatrically by United Artists, it was reissued by Astor Pictures as “Jimmy Steps Out’’ and had its first documented New York City TV showing under that title on Sunday June 20, 1948 — reportedly the first movie ever shown on WPIX, which had launched a few days earlier. It reverted to its original title for a showing later that year on WABC. Stewart apparently caught it during what he describes as his very first glimpse of TV, when it turned up on the “CBS Film Theatre of the Air’’ on Saturday February 25, 1950 (he was possibly in town promoting MGM’s “Malaya,’’ which had opened three days earlier at the Capitol). 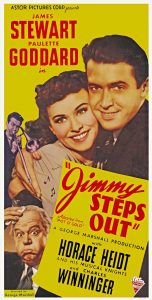 “James Stewart acknowledges that TV has brought out a couple of ghosts he would just as soon forget,’’ Pryor wrote in The Times. “He first saw television in a New York hotel room in 1950. Having tuned in a ‘jumble of noise and confused action,’ he was happily thinking ‘if this is television, Hollywood has nothing to worry about, until suddenly I recognized myself on the screen. It took me some time to figure out it was ‘Pot O’Gold,’ a picture that I had done before going into the Army and had never seen.’’

The film Stewart mentions more approvingly in the interview is “It’s a Wonderful Life’’ (1946) which had its NY TV premiere on Saturday April 7, 1956 on WCBS’ “The Late Show.” It was the big draw in the “Seventh Anniversary” package of ten films released to TV by M & A Alexander, which was soon absorbed by National Television Associates. It drew the second-highest rating of “Late Show” features shown in the first half of 1956 (the debut of “Three For Bedroom C,” a forgotten 1952 “NaturalColor” oddity starring Gloria Swanson that was apparently shown in black-and-white did slightly better).  “Wonderful Life” had been repeated in New York at least four times (including showings on “The Late Late Show’’ and “The Early Show’’) by the time the piece appeared, with another scheduled for Christmas Night 1957 on “The Late Show.’’

Stewart continues in The Times piece: “But it’s not all bad. ‘It’s a Wonderful Life,’ which I made with Frank Capra after we both got out of the army, has been on television many times. I’ve seen it and I think is very well adapted to TV. I’ve had more comment and favorable reaction to this picture on television ten years after it was made than when it was first shown in theaters. It seems to please audiences more on a little screen.’’

“It’s a Wonderful Life’’ of course was a box-office disappointment (by dint of Frank Capra going way over budget) that achieved its place in the public consciousness on television. It really picked up momentum after NTA failed to renew its copyright and it fell into the public domain, with wall-to-wall, royalty-free TV showings on multiple cable networks and PBS outlets in the 1980s and 1990s and countless video releases, many sourced from terrible materials. NTA eventually policed its exclusive ownership through underlying copyrights to the story and music, paving the way for lucrative annual showings on NBC — quite a trick for black-and-white pre-’48. Those showings are now licensed by NTA’s corporate successor Paramount Pictures, which had sold the picture to M. & A. Alexander in the first place after acquiring Liberty Pictures, the outfit that co-produced “It’s a Wonderful Life’’ with distributor RKO.

“Pot O’Gold,’’ no masterpiece, remains mired in public domain hell, doomed to haunt YouTube and DVD bargain bins in sketchy fourth-generation transfers apparently derived from old TV prints. By the way, it wasn’t even the first Stewart film to hit television. That honor appears to belong to a much better film — David O. Selznick’s production of “Made for Each Other’’ (1939) co-starring Carole Lombard, which had its first documented showing on WNBT (now WNBC) on September 17, 1945. Like an astonishingly huge percentage of films that showed on early TV, it’s also drifted into the public domain. One is another Capra, “Meet John Doe.” But that’s a story for another day.