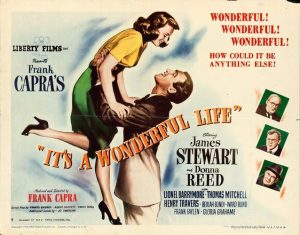 A quarter of a century ago, “It’s a Wonderful Life” was ubiquitous on TV and in video stores, the most beloved public-domain film of them all. That all ended in June 1993, when Republic Pictures’ sent out dozens of cease-and-desist letters to video distributions, TV syndicators  and individual stations that had exploited the film’s public-domain status for royalty-free showings (often with terrible copies) after its copyright status expired in 1974. Apparently it wasn’t renewed, as then required, because of a paperwork snafu.

Republic successfully asserted ownership based on underlying active copyrights on the film’s original story (Philip Van Doren Stern) and its score (Dmitri Tiomkin). The film made its NY TV debut April 7, 1956 on WCBS’ “The Late Show” via M & A Alexander,  a TV syndicator that purchased it from Paramount, which had acquired “It’s a Wonderful Life” along with Liberty Pictures’ other assets. Alexander was merged into NTA, which became Republic and itself was folded into original owner Paramount. There have been licensed annual exclusive showings on NBC since December 10, 1994  as well as only authorized editions on DVD and Blu-ray.

Here’s a piece I published on June 15, 1993 in The Record of Hackensack, New Jersey:

You’ve heard of the Grinch that stole Christmas.

Now Republic Pictures, which let “It’s a Wonderful Life” lapse into
the public domain by failing to renew its copyright 18 years ago, wants
to take it back.

If the studio’s lawyers prevail, Frank Capra’s movie will no
longer receive marathon showings on a dozen channels at Christmastime,
and it may no longer be possible to buy video versions on more than
three dozen different labels for as little as $3.99.

Republic announced Monday that it was seeking to corner the “It’s a
Wonderful Life” market on the basis of the rights to Dimitri Tiomkin’s
musical score, which it just acquired, as well its ownership of screen
rights to the short story on which the 1947 movie is based. Russell
Goldsmith, the company’s chief executive officer, said the move would
allow Republic “to preserve and protect the integrity” of the film,
which has been seen in unauthorized copies of widely varying quality.

James P. Tierney, a Los Angeles attorney representing the company,
said he had sent out more than 500 letters on Friday to video
distributors, video stores, tape duplicators, TV stations, and networks.
The letter threatened suits if they don’t stop copying, selling,
renting, or showing versions licensed by Republic, as well as seeking
damages for past infringements.

Tierney said he had received 15 phone calls on Monday and “everyone
uniformly agreed to respect Republic’s rights.”

He said company officials had not acted earlier to protect the
film because “they were not clear” on points of the copyright law.

“Republic has been selling videos from their original negatives and
licensing them to television for years,” he said. “A lot of these
pirates were making copies from second- and third-generation prints, and
selling people defective copies.”

If Republic files suit against other vendors of “It’s a Wonderful
Life,” the case will mirror one brought recently by John Wayne’s son,
Patrick. The younger Wayne, who failed to renew the copyright on his
father’s 1961 movie “McClintock,” which the family owned, is suing
Goodtimes, a video company which brought out a public-domain version of
the film simultaneously with a Wayne-authorized version on MPI Video.
Wayne, too, contends that he controls the movie through music
copyrights.

The original 28-year copyright for “It’s a Wonderful Life” expired
in 1975, but Republic failed to file for a 28-year renewal, as the
copyright law then allowed. Like hundreds of other movies with lapsed
copyrights — the original “A Star Is Born” (1937) and “Royal Wedding”
(1950), with Fred Astaire, are two examples — “It’s a Wonderful Life”
entered the public domain. This meant, essentially, that anyone who
could get hold of a copy could show, rent, sell, or copy the movie
without paying a cent to Republic, which retained ownership of the
original negative.

The movie’s new status did not go unnoticed by PBS stations, some
of which were showing it six or seven times a season by the early 1980s.
It also became highly cost-effective programming for the burgeoning
cable-television and home-video industries. Public-domain titles are not
generally tracked by the industry, but home-video experts believe that
in all of its various versions — including at least two colorized ones —
“It’s a Wonderful Life” may well be the single best-selling video title
of all time.