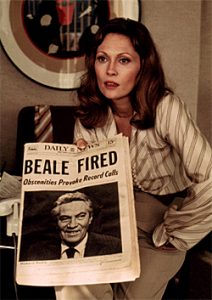 So you’re an actor-filmmaker with 14 Oscar nominations, winning Best Director and an honorary Oscar for producing. You spend decades developing your passion project on Howard Hughes and it not only flops but fails to get a single nomination from the academy.

Oh, you’re 79-year-old Warren Beatty, who has been trolling people by teasing and misleading them since before most of you were born. So what happens when you’re invited to present the Best Picture award with the co-star of your most famous film, from 50 years ago — two days before your latest movie arrives on DVD?

We sure saw last night.

Watching videos of the biggest gaffe in Oscar history this morning, it seems to me that Warren Beatty not only realized he was handed the wrong envelope, but that he was delighted at being handed a once-in-a-lifetime opportunity. And decided to have a little fun with the people who snubbed him, as well as promoting his ironically named “Rules Don’t Apply” on a global scale.

As my former colleague Kyle Smith notes in his analysis in today’s New York Post, Beatty’s main acting mode has always been playing puzzlement. He certainly did that so masterfully last night that some viewers wondered on Twitter if he was senile. Hardly.

A few years ago, Beatty called me on my cellphone — he said, to explain why he couldn’t give me an interview promised by a publicist to promote the anniversary of “Red.” In a very entertaining 25 minutes he didn’t actually do that and said he MIGHT be able to meet with me after an upcoming screening in New York (Two interviews soon turned up in the New York Times and no, that invite never actually materialized).

Was Dunaway, who actually made the wrongful announcement that “La La Land” won Best Picture, in on the joke? I dunno. Maybe she thought about that scene in “Network” where her TV producer exults in the fact that the firing of Howard Beale pushed half a dozen huge stories off the front page of the Daily News? It’s equally possible that she was just too vain to wear her reading glasses and could only make out the name of the movie on the card, which was actually for the Best Actress winner.

Why did the show’s producers let this play out for several minutes before someone was sent out with the correct card? The conspiracy theorist in me likes to believe that they suddenly realized they had the viral moment they obviously so badly wanted to deliver, but bungled in that terribly contrived stunt where “civilians” were brought in as surprise guests.

This way, they got the priceless image of a white producer of “La La Land” literally handing off the Best Picture statuette to the black actor-director of “Moonlight.” Talk about the perfect optic for the year after #OscarsSoWhite.

And notice that the wily Warren Beatty, who has been on stage during this whole farce, is smiling like the Cheshire Cat in the background. And no doubt thinking about turning down interviews from every media outlet in the world a day before “Rules Don’t Apply” — his excellent comedy and ultimate statement about his love-hate relationship with Hollywood — hits DVD.