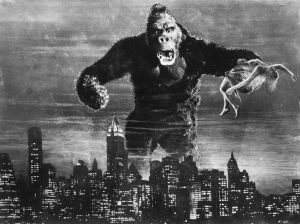 With SKULL ISLAND coming to theaters on Friday, it’s time to remember the first time that “The Eighth Wonder of the world” arrived on television 60 years ago tonight. If you were a kid in New York City on March 5, 1956, it was a huge deal when KING KONG (1933) made its TV debut on WOR’s “Million Dollar Movie.”

I watched at least five of the 16 showings that week (nightly at 7:30 and 10 p.m., plus matinees on Saturday and Sunday) and this seven-year-0ld had plenty of company. A 1952 theatrical re-release had done better than the original 1933 release, hence the choice of “Kong” to kick off the RKO titles on “Million Dollar Movie,” whose early seasons leaned heavily toward ’40s films leased from the Bank of America (repossessed titles that began with MAGIC TOWN) and titles from the short-lived International Pictures and independent producer David O. Selznick. 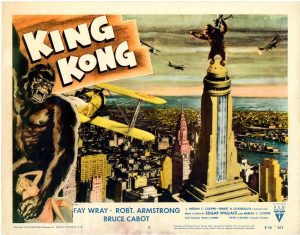 The ratings for “Kong’s” week-long debut were so spectacular that RKO General, which was still operating the movie studio as well as broadcast properties, cancelled plans to show it on four of its other TV stations (it had already shown in Memphis) and put it back in theaters for its fourth re-release that summer. (In some markets, it went head to head with the new GODZILLA — the two monsters would actually be pitted against each other six years later in Universal and Toho’s immortal KING KONG VS. GODZILLA, which is slated for a 2020 remake.)

The original “Kong” didn’t surface again on TV until August 4, 1957 when it made its national debut as one of 26 RKO titles — all previously seen on WOR –broadcast on ABC’s “Hollywood Film Theater.” It returned to “Million Dollar Movie” for an encore run beginning on July 7, 1958 and showed for decades in heavy rotation on the station (including what became regular Thanksgiving showings beginning in the 1970s) until RKO General was forced to sell the station in 1986 because the FCC found its parent company, General Tire, engaged in unethical business practices like requiring its suppliers to buy time on the TV stations.

These later showings were generally in two-hour timeslots, but the early showings were all edited to fit into 90 minutes, which meant that, after commercials, we were seeing at most 75 minutes of a movie that originally ran 100 minutes. “Million Dollar Movie” debuted both “Citizen Kane” and “Yankee Doodle Dandy” in two-hour time slots in 1959, but it would be years before this became the norm on WOR.

In a 1956 article in the New York Times, WOR’s general manager actually claimed that station’s editors were actually “improving” movies by cutting them. But even when WOR began showing “King Kong” in a two-hour time slot in the early 1960s, it wasn’t exactly the same film that wowed audiences when it opened on March 2, 1933 at Radio City Music Hall and the nearby RKO Roxy. The pre-code film had been cut to receive a code certificate for its 1938 reissue, and some portions were optically darkened to satisfy the censors. The most notable omission was a scene where Kong attempts to undress Ann Darrow and smells his fingers. 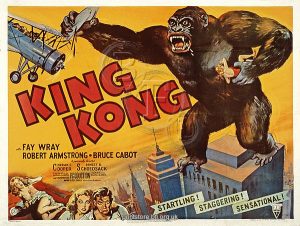 The missing footage was restored for a 1970 re-release through Janus Films, courtesy of a 16mm print discovered in Philadelphia a year earlier. But it was not until 2005 that then-owner Warner Bros. completed a deluxe 4K restoration from all of the best surviving elements, including a non-darkened 35mm print from the UK that even included 4 minutes of entrance and exit music. This is the excellent version now available on video.