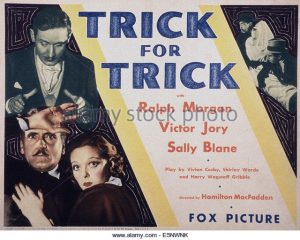 One of the many enjoyable things I’ve been doing since I retired from the New York Post last October is attending matinees at the Museum of Modern Art. The current series is devoted to Depression-era films, and it includes well-known titles as well as obscurities I’ve ever heard of, like William Dieterle’s “Adorable” (1933), a delightful Lubitsch-like musical starring Janet Gaynor based on a German film co-written by Billy Wilder.

With credits like that, I wasn’t surprised it was good — but I didn’t know what to expect from “Trick for Trick,” an even less well-known 1933 Fox release from the MoMA vaults directed by Hamilton MacFadden, whose best known films are the bizarre musical “Stand Up and Cheer!” (1934) that shot Shirley Temple to stardom, and “The Black Camel” (1931), the only one of his three Charlie Chan mysteries that is known to exist. (Both are on DVD).

One of many early Fox talkies that seem to have never made it to TV, much less video, “Trick for Trick” is a comedy-thriller derived from a short-lived Broadway play with wonderfully stylish, expressionist-style sets and delightful special effects by William Cameron Menzies of “Gone With the Wind” fame. The setting is a spooky mansion full of trap doors and sliding panels where a turban-wearing medium named Azrah (Ralph Morgan, relishing a rare opportunity to ham it up as much as his younger brother Frank as the lead) invites his former protege LaTour (Victor Jory, the size of whose role bears no relationship to his second billing) and a bunch of other murder suspects to a midnight seance. This bitchy duo each try to convince a dim-witted police detective (Boothe Howard) that the other is responsible for the death of Azrah’s female assistant six months earlier. In one of the movie’s funniest scenes, the detective discovers that virtually all the invitees is packing heat.

Besides being stylishly photographed (by L.W. O’Connell) and designed, “Trick for Trick” is an awful lot of fun. Loretta Young’s sister Sally Blane (who would play a similar role in “Charlie Chan at Treasure Island”) is the female lead. The juvenile male lead, billed as Clifford Jones (as he was in the W.C. Fields vehicle “Tillie and Gus” that same year) was a familiar face to me. I interviewed him under his real name, Philip Trent, 35 years ago at the Actor’s Home in Englewood. Trent, who had two unbilled roles in “Gone With he Wind,” never mentioned “Trick for Trick,” possibly because he spends virtually the entire 67-minute running around hysterically in a raccoon coat.

Also on hand are a bunch of great character actors, including Tom Dugan (who would go on to play the actor who impersonates Hitler in “To Be Or Not to Be”), Edward Van Sloan (Van Helsing in “Dracula”), the ubiquitous Willard Robertson (“Heat Lightning”) in an offbeat bit of casting and an unmilled Angelo Rositto, who played dwarfs with everyone from John Barrymore (the silent “The Beloved Rogue”) to Mel Gibson (“Mad Max: Beyond Thunderdome”) during his six decade career. The standout is Luis Alberni, whose hilariously over-the-top turn as a very mad scientist was singled out in young Andre Sennwald’s enthusiastic review in the New York Times (it opened at the Roxy in support of a vaudeville bill).

“Trick for Trick” may not hold up as a murder mystery, but it’s solid pre-code entertainment that deserves a showing on TCM and a video release.