I caught a couple of great new restorations at the Museum of Modern Art on Friday night. “Sherlock Holmes” (1932) was the delightful final screening of “To Save and Project,” MoMA’s annual festival of international film restorations. “That Brennan Girl” was the opening salvo in “Republic Rediscovered,” a series of 30 new restorations resulting from a fruitful collaboration between Paramount Pictures, owner of the Republic Pictures library, and Martin Scorsese’s “Film Foundation.”

I saw at least part of William K. Howard’s “Sherlock Holmes” around 45 years ago on WFSB’s “Cinema Club 3,” but didn’t remember much because the series (including some early Fox talkies that were newly arrived to TV) was broadcast at 11:30 on Sunday nights and I had to be at my desk at the Hartford Times by 7 am on Monday.

“Sherlock Holmes” is a whole lot of fun and, and — like Howard’s superb “Transatlantic” (1931) that kicked off this year’s “Save and Project” series — has a visual vitality and narrative sweep that makes it far easier to savor than many stage-bound early talkies.

The wit of Clive Brook’s Sherlock — he had actually played the role twice in two even earlier talkies, including a cameo in “Paramount on Parade” — is drier than Basil Rathbone’s definitive detective, but still much more lively than John Barrymore’s 1922 silent rendition. (Especially when Brook dons a particularly amusing disguise to confront Moriarity).

Both those films are credited as based on William Gillette’s stage play of the same name (as is Rathbone’s 1939 THE ADVENTURES OF SHERLOCK HOLMES) though they vary quite considerably in their particulars from the 1916 film version starring Gillette himself.

Brook’s edition benefits tremendously from the terrific Moriarity of Ernest Torrence, a towering Scottish-born villain in silents who would make just two more films before his death at the age of 54 the following year. In the striking opening sequence, Moriarity is sentenced to hang for murder, prompting Holmes to retire and set a wedding date with his fiancee (Miriam Jordan).

Because this film brings its Victorian Era hero into the 1930s, when Moriarity inevitably escapes he recruits a band of international criminals (including American gangster Stanley Fields) to wage an amusing Chicago-style mob war in London as part of his plot to eliminate Holmes and his arch-rival at Scotland Yard (Alan Mowbray, playing it mostly straight).

Brook’s pistol-packing Sherlock may not be strictly according to Doyle, but this 69-minute adventure, which has been out of circulation for years, builds to a rousing (if wildly improbable) climax. MoMA has no repeats scheduled, but many of their restorations have turned up at the TCM Classic Film Festival (which has not yet announced its full schedule for this year). Fox is listed as collaborating with MoMA on this restoration, so perhaps they still retain (or will be wiling to negotiate) the rights necessary to put this classic out on video in this gorgeous new video transfer taken from a pristine 35mm nitrate print. 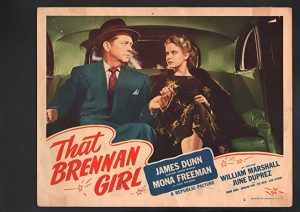 MoMA’s busy Dave Kehr, who curated “Save and Project,” also wrangled the Republic series and introduced Andrea Kalas, head of Paramount’s archives, who presented “That Brennan Girl.” It certainly lived up to MoMA’s promises about this “unaccountably overlooked” film, the final work of the underrated director Alfred Santell (whose masterful but sadly orphaned “Winterset” [RKO, 1936] could also use restoration).

For the first two-thirds at least, this story by former star reporter Adela Rogers St. John (a regular guest on “The Merv Griffin Show” as an old lady in the ’70s) goes against the Hollywood grain, daring the audience to sympathize with the character played by Paramount ingenue Mona Freeman —  a young San Francisco woman who picks up lots of bad habits from her hard-bitten divorcee mom (British actress June Duprez, the beautiful female lead of Korda’s “Thief of Bagdad,” who was only eight years older than Freeman).

A fleeting wartime romance leaves Freeman a widowed mother who can’t quite give up her love of nightlife, especially after the older man (James Dunn in one of his final screen appearances, though this Oscar winner continued to work regularly on TV up until his death in 1967) who befriends her is sent off to prison.

Before a more conventionally redemptive climax that may have been dictated by the studio, “That Brennan Girl” tackles its frequently sordid milieu with more honesty than you’d see in most Hollywood films of this era. Extensive location shooting adds to the verisimilitude, and the evocative score is by George Antheil (best known these days as the collaborator with Hedy Lamarr on the frequency-hopping technology that cellphones use). It’s very much worthy of reevaluation, and if you’re in the New York City area, MoMA will be offering repeats on Feb. 9 and Feb. 15, both at 5 p.m.

Republic reissued “That Brennan Girl” in 1951 in a re-edited version called “Tough Girl” and it ran frequently on TV (it’s unclear in which version or versions) between 1955 and around 1970. (“Suds up to here” was Howard Thompson’s entire capsule review in the New York Times, which seems wildly unfair). “That Brennan Girl” has circulated on the public-domain market since the ’70s, but hopefully Olive Films will offer it among its ongoing series of Republic restorations on DVD and Blu-ray.

The first part of the tantalizing, 30-film “Republic Rediscovered” (I’m unfamiliar with many of the tiles, though I have run across listings for many of them in my ongoing movies on TV project) runs through Feb. 15 and continues from Aug. 9 to 23.

Scorsese himself will be introducing John Auer’s “The City That Never Sleeps” tomorrow (Feb. 3) at 7 p.m. The full schedule is here. [http://press.moma.org/wp-content/files_mf/republicrediscovered_screeningschedule82.pdf]. And if that’s not sufficiently tempting, get a load of this mouth-watering trailer:

I’ve never been entirely comfortable with the label of cinephile, but this sure looks like the cinephile event of the year to me.