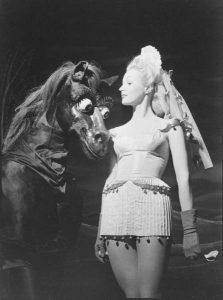 Before she starred with James Cagney (“White Heat”), Dana Andrews (“The Best Years of Our Lives”) or Danny Kaye (“The Secret Life of Walter Mitty”) — much less Gregory Peck, Randolph Scott or Zachary Scott et. al. — Virginia Mayo was part of a PG-13 vaudeville act with a horse.

The libidinous dancing horse, Pansy, was originally played by her sister Florence in front, with her brother-in-law Frank Mayo bringing up the rear.  The former Virginia Clara Jones had adopted Mayo as her stage name by the time the three of them appeared in a 1939 Universal short called “Gals and Gallons.”

Virginia Mayo was still with the act when she made her Broadway debut in “Banjo Eyes” (1942), a musical version of the classic farce “Three Men on a Horse”’ that starred Eddie Cantor. She was photographed with Pansy by Eliot Elisofon for Life Magazine.

Mayo had apparently quit horsing around and was a featured dancer at the Copacabana when she was signed by Samuel Goldwyn, appearing first as a Goldwyn Girl in Kaye’s screen debut, “Up in Arms” before becoming his most frequent leading lady.

It’s unclear whether “Gals and Gallons” has survived. I couldn’t even find a production still online, let alone a clip. It’s supposedly available for download from a dodgy-looking Czech website.

But there is a clip http://https://vimeo.com/77662477 of the Mayo vaudeville routine that was apparently filmed in the mid-1940s. It’s been identified as part of the “Soundies” series — cheaply-shot 16mm musical shorts that were designed to be shown in jukebox-like devices called Panorams. 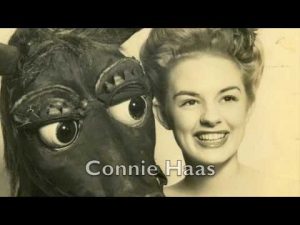 A woman who’s been identified on YouTube as Connie Haas has Virginia’s old part as Pansy’s whip-wielding mistress in this weirdly mesmerizing routine, which can be viewed in its original film at Vimeo, apparently uploaded from a Library of Congress restoration.

There are several Pansy supercuts on YouTube. The most famous reedits the short to the techno-rock number “The Drill,” reversing the film at some points and zooming in at others to emphasize the act’s sexual aspects.

As for Pansy, her (or she) was still hoofing as late as 1958. Pansy, who has had a makeover, even gets star billing in this more family-friendly number from “The Mickey Mouse Club.”

It’s unclear when Pansy retired. When Mayo passed away in 2005, Pansy was mentioned in her New York Times obituary. 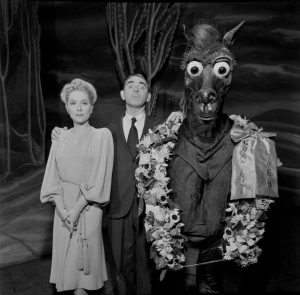